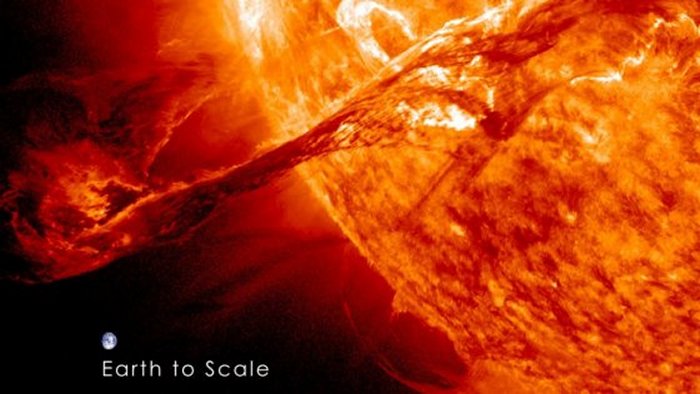 On 4/15/2020 there was a subtle CME as seen here. This wasn’t expected to hit us as it wasn’t directed at Earth from the Sun. However, on 4/20/2020 it sure did! This was enough for me to start a post about understanding why I care to share this scientific data so openly on the website, astrology posts, and my social media.

First, we will get some sources and terms out of the way and then we’ll explore what and how we are effected by our Sun.

Wiki Definition of a CME:

A coronal mass ejection (CME) is a significant release of plasma and accompanying magnetic field from the solar corona. They often follow solar flares and are normally present during a solar prominence eruption. The plasma is released into the solar wind and can be observed in coronagraph imagery.

Wiki Definition of a Solar Flare:

A solar flare is a sudden flash of increased brightness on the Sun, usually observed near its surface and in close proximity to a sunspot group. Powerful flares are often, but not always, accompanied by a coronal mass ejection.

END_OF_DOCUMENT_TOKEN_TO_BE_REPLACED

In this post, I am going to describe the elements in a way that anyone can understand them universally. By applying both the classic elements, scientific elements, and how they apply to us physically, mentally and spiritually all at once. Much of this post is based upon my own understanding of Hermetics and mystical Alchemy with a bit of a modern and quantum level of understanding. Applied to each of our own mental health and emotional hearts, I hope to encourage you to consider your own body, mind, and soul in these ways. I will expand on this post over time and reference it frequently as a baseline, feel free to Bookmark and Share as a reference!

END_OF_DOCUMENT_TOKEN_TO_BE_REPLACED

I have known a number of people who are extremely afraid of the stories of doom, negative news, and scientific findings about us humans, our planet, and spiritual prophecy and legends. I want to expand on a few of these with a Light of Optimism for those who are ready to see life as it is. Eyes open, with no fear.

Let’s remember this is a blog about loving your life, regardless of what is going on in the world wide web of a galactic, multi-dimensional reality.

END_OF_DOCUMENT_TOKEN_TO_BE_REPLACED

Chiron has a seriously interesting orbit that has sprung a new concept of its effect on us in Astrology. Pulling from both an Astronomy, Cosmology and Alchemic point of view.  The goal today? To integrate you into a full understanding of how we are connected to the Cosmic Web of Life at Large. Introducing a new blog category for Life of the Universe, as a Universal Language of Love and Light approaches you now.

Astronomy Astrologers named this newly discovered planet of 1977 as Chiron. The centaur, wounded healer as the story goes – could heal others but not himself.

While reading about the astrology of Orion constellation, I noticed that this alignment to the Great Pyramids of Egypt make sense in this regard. As it’s technology is thought to distribute harmonious effects of healing, yet the age of silver, iron, the Dark Ages still took place and had its effect on the land and our lives.

A lot has changed in 36,000 years (yes that’s about x20 older than most think the pyramids are). I believe this because it doesn’t make sense that the Sphinx who is obviously aligned to Sirius in the Age of Leo, that we can believe that the Sphinx and Pyramids were constructed in the devastation of weather in that age. That means we have to travel back to the last time of the Age of Leo, which was 36000 AD, in the Golden Age.

What’s great about this large scale of time reverence using astrology and geology, we can see farther than our illusion of human evolution. Yet we can still see the return of the human cycle as we are entering into the Golden Age again, on the Rise…

END_OF_DOCUMENT_TOKEN_TO_BE_REPLACED

To satisfy the Chakras and the Planetary Rulers assigned to them, we can look to the archetypes of the zodiac for guidance. Not to be taken too literally, Alchemy has some interesting points to governing our body’s rhythms, cycles, and organic pursuits to live a healthy life of vitality. When concerned with our physical wellbeing, we must consider the elements of emotion, thought through energy and consciousness.

May you engage in your subconscious understanding of the ancient archetypes, spirits, and angels, known to you through zodiac symbolism, association, and source while you read for full understanding.

This post is my own attempt to explain the energy of the human body for physical, emotional, mental and spiritual health. You can view the Correspondence Used in this post, in full, in the Self Healing and Spiritual Health Databases here.

END_OF_DOCUMENT_TOKEN_TO_BE_REPLACED

For You and for Gaia.

As a follow up to the previous Root Chakra post I want to “cover some ground” about how our own Root Chakra Energy may or may not have an effect on other creatures, and Gaia.

To start with, I’ll touch on two different psychological archetypes I have and how these developed and helped me become more aware of who I was. I spent a few years on the streets of the West Coast of the USA, and why Traveling was the most impactful year for me to look back on recently.

Then we’ll talk about how our energy physically grounds us to the Earth, as it transfers to us, through us, and out constantly in motion. And finally how our instincts, natural rhythm, and spiritual drive is what helps us turn the tables in America – back to a residence of vitality and abundance!

In the previous post, depending on if you were in a healing or a hurting kind of mindset, it may have been hard to take in emotionally. I think that’s a fair warning sign that you would like some answers as to Why, and how to transmute them so that you can feel better too. Additionally, how does this make sense logically?

END_OF_DOCUMENT_TOKEN_TO_BE_REPLACED

Have you ever heard of the “Dark Night of the Soul”? Let’s be real and admit that I have been undergoing a hugely dark part of myself in recent months. I have undergone an extremely revealing mental battle within my own inner world and spirit. It has led me into a dark world of regret, anxiety, and ultimately confusion.

During my self-healing journey, I have been on a mission to purge my life of everything that no longer serves a purpose in my future. I have been restoring my house and routines into order. As well as my mental space. This, my friends, was the hard part.

A new kind of emotional awareness of my mental patterns started to take place. As I worked with my body’s energies, I started to really notice in my meditations where exactly where in my body, that I was hurting. When I drop into my own little world of calm and connected, I scan my body. I notice the little uncomfortable places, my posture, the pull of gravity, and any soreness. Some of these areas, I note to address later note. Others, I know are pains and weaknesses I have had for a very long time.

I think about and remember so much about my life. From the beginning, now and into the future even in some moments. I can’t say how much control I have of my thoughts, although I have become more mindful about observing them. I have begun to train and rewire my brain with conscious effort.

END_OF_DOCUMENT_TOKEN_TO_BE_REPLACED

I have become so much more of a mindful person in the last few months! What started with Folding Clothes to Perfection, lessons in mindfulness has ended up being an amazing gift of appreciation for every moment in time. Expanding my awareness and living inside each moment.

I’ll be honest, I get called out for being a bit of a “space cadet”, constantly checking in and out of reality. Thinking and listening to everything all at once. Off, in my own little world.

Especially when life is moving and things are happening all around you, whether at work or school or home or out. You use your mind openly, to scan and observe and react to it all happening at the moment. And by being in a more mindful state of being, it really allows you to catch all the little amazing messages in every moment. I’m really starting to be aware of what matters to me, and what it even means to be alive.

Alternatively, I am multi-tasking much less. By being a more focused person when I am performing a task, I have found that I have gotten closer and closer to perfection. Additionally, these tasks take me less time to do them. Allowing me more time to do the things I ‘want’ to do instead.

END_OF_DOCUMENT_TOKEN_TO_BE_REPLACED

By thinking about what you want, it enters our subconscious, which may or may not surface into conscious thought. If you allow your thoughts to remain conscious and think about that intensely. Then you will attract those things to which you are thinking.

If you are to change your life you must attract what you want. The secret to your own success lies within understanding your strengths first as a human, then as a unique human.

To think about your thoughts is to be conscious.

To make decisions for your life is to have a will.

To influence your life, you must use empathy.

And to practice empathy, you must love yourself.

Do you see how you must always work from within?

Everything else about your own human experience is because you brought it into your life.

That’s the action part… Don’t get mad at me yet, just keep reading.

END_OF_DOCUMENT_TOKEN_TO_BE_REPLACED

⭐ One moment at a time

Greetings! I’d just like to say that everything is always okay, its always been okay. It’s already okay. You are exactly where you are meant to be, and so am I.